HERE ARE THE TOP 10 FOOTBALLERS OF ALL TIME! 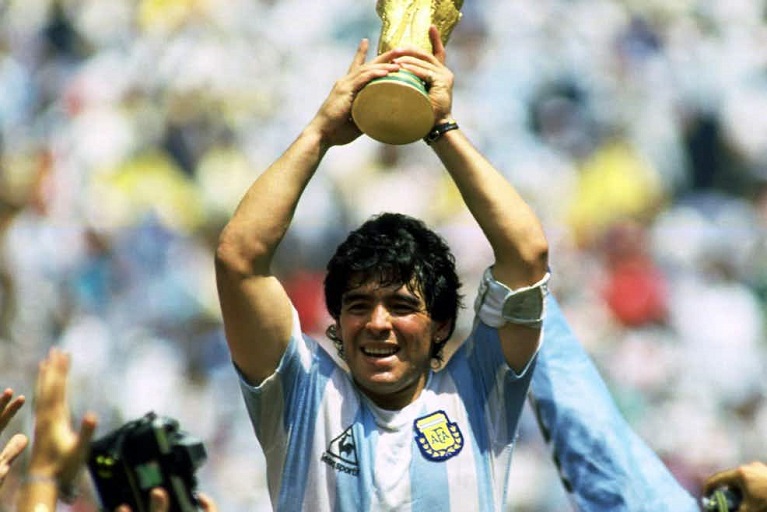 This is a very sensitive topic among almost every avid football fan but there are countless areas where we can all find common ground and agree why some of the best are actually regarded in such high esteem.

Also, numbers and titles do not lie and this is a major factor when we start to consider the best footballers of all time.

The biggest debate today is obviously between Lionel Messi and Cristiano Ronaldo, who recently just became the highest-scoring footballer in history, after his 760th goal against Napoli in the Italian Super Cup final.

In no particular order, SportPesa’s blog has a look at arguably the greatest to ever do it!

Many believe that at his very best, the Argentine forward was the greatest footballer we have, and will ever see. Effective and exceptional in equal measure.

The late Maradona famously scored the ‘hand of god’ goal past England goalkeeper Peter Shilton in 1986 to give his country a 1-0 lead in the quarterfinals. Argentina went on to win that edition of the FIFA World Cup.

His second goal was voted FIFA Goal of the Century after his close ball control and devilish movement saw him dribble past 5 England defenders before securing victory with a cool finish.

His 259 club goals in 491 club appearances and another 34 in 91 appearances for Argentina were unmatched during his time.

Bursting onto the scene as a 17-year-old looking to avenge the tears of his father when Brazil lost the 1950 World Cup final, Pele would go on to win the World Cup on three separate occasions and make Brazil the football nation.

The Brazilian’s peak is fable at this point, possibly because the world didn’t really get to see it due to his injury at the 1962 World Cup, but more aptly because between 1958 and 1962, no one has ever scored more goals than him.

According to TIME Magazine, Pele is regarded as one of the 100 most important people of all time.

He had a completely insane record of 541 goals in 560 club football appearances and another 77 in 92 games for Brazil.

The Portuguese forward is one of the best players of his generation, a player who has found the net with such consistency that a 40 goal season is actually somewhat disappointing.

He recently surpassed Josef Biscan’s record and became the world’s highest-scoring footballer in history and we cannot forget the fact the has 5 Ballon d’Or titles to his name.

Ronaldo holds the records for the most goals (134) and assists (41) in the history of the UEFA Champions League and is the second man to score over 1,000 professional goals, the first European to achieve that feat.

At 35, he has shown the physical capability and mental stability to continue playing for at least three more seasons in which he surely can break even more records.

Born and raised in central Argentina, Messi relocated to Spain to join Barcelona at age 13, for whom he made his competitive debut aged 17 in October 2004 and the rest as they say, is history!

He has gone on to score 455 goals in over 500 appearances for the Catalan club, winning four Champions Leagues, nine La Liga titles and six Copa del Reys.

Messi has not been as lucky on the international stage with Argentina, losing 4 major finals but this takes nothing away from the fact that he is arguably the best player this generation has and will ever see.

In 2015, Messi became the all-time top scorer in La Liga and leading Barcelona to a historic second treble, after which he was awarded a fifth Ballon d’Or.

Three World Cup final goals and the best goal in UEFA Champions League history in the 2002 final, it’s fair to say that Zidane wasn’t just one of the most entertaining footballers of all time, but also one of the most ‘clutch’.

There is nothing that Zidane did not win, including the World Cup title in 1998, after which he easily won the Ballon d’Or.

‘Zizou’ as he was popularly known as was renowned for his elegance, vision, passing, ball control, and technique enabling him to win the FIFA World Player of the Year an admirable 3 times.

The Dutchman is widely regarded as one of the greatest and most prolific players in the history of the sport and his 3 Ballon d’Or titles in his name tell a story of their own.

A now mythical figure, Cruyff is arguably the most influential footballer of all time; and one of the most talented too. Especially after being arguably solely responsible for inventing modern football.

He scored a resounding 412 goals in 514 appearances in club football, a majority being for his home club Ajax and also added another 33 goals in 48 appearances for his country.

If there was ever a footballer who had the total package and could do it all, it was Franz!

A defender who scored 79 goals in club football and an extra 14 for West Germany, that is an admirable achievement.

Known as Der Kaiser, Franz Beckenbauer was the man behind the majority of Germany’s footballing triumphs over the years.

His skill and prowess also made him one of the two defenders to ever win the Ballon d’Or and just as fate would allow, he obviously won it twice.

Personally, this is the greatest striker in football history. Ronaldo has been the influence for a generation of strikers that have followed.

His prowess saw him crowned Ballon d’Or winner on two separate occasions, first in 1997 making him the youngest ever recipient of the award as well as FIFA World Player of the Year three times.

In 98 matches, Ronaldo scored 62 goals making him the third highest goal scorer for Brazil and this is inclusive of being the youngest member of the 1994 World Cup winning team and winning the Golden Ball at the 1998 tournament.

As if this was not enough, the speedy and skillful forward bagged 247 goals in 343 club matches.

Michel Platini is now better known by the footballing world as a disgraced former UEFA president, but, for the purpose of this list, we’re going to pretend that never happened.

Michel Platini is undoubtedly the greatest goal-scoring midfielder of all time as in three consecutive seasons in his prime, Platini won the Golden Boot award in a league which boasted the footballers of all time.

Platini was similarly potent for France, guiding the nation to their first ever major football success by scoring a whopping 9 goals in five games at the 1984 UEFA European Championships.

Between 2004 and 2006, the world bore witness to something truly special: a footballer who played the beautiful game with genuine joy.

The flicks, the tricks, the gold boots, the smile and his attitude represents all that we all love about the beautiful game of football.

Ronaldinho scored over 200 goals for his various clubs and another 33 for Brazil but it was not about his goals but his flare and command of the football that makes him the most entertaining footballer we have ever seen.

One thought on “HERE ARE THE TOP 10 FOOTBALLERS OF ALL TIME!”