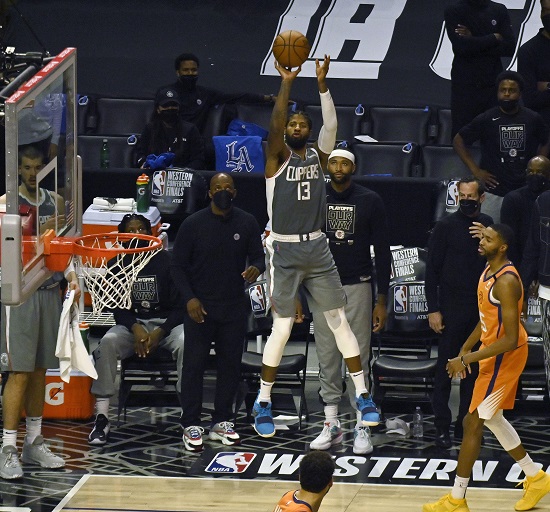 Giannis Antetokounmpo and Khris Middleton combined for 71 points as the Milwaukee Bucks took a 2-1 series lead against the Atlanta Hawks.

Middleton scored 20 of his playoff career high-tying 38 points in the fourth quarter, leading the Bucks to a 113-102 victory.

Of all things that could go wrong, Trae Young injured his ankle after stepping on the official’s foot and is a major doubt for Game 4 on Wednesday.

Young scored 35 points in the defeat and there is no doubt that without him, the Hawks impressive campaign so far may have reached its end.

Just as in the semifinal series, the Hawks split two games on the road before losing their first home game. They won the series in seven games.

They go into Game 4 in Atlanta knowing that they need nothing less than a victory to keep their hopes alive of a first finals appearance since 1961.

In the Western Conference finals, things got heated as Paul George hit a NBA playoffs career-high 41 points as the LA Clippers beat the Suns 116-102 on Monday.

The Suns still lead the series 3-2 but that all-important win for the Clippers forced a Game 6 that has the billing to be the most hotly-contested game of the season.

George has now scored at least 20 points in all 18 games he’s played in this postseason so far, and he became just the fourth player to open a postseason with a 20-plus-point streak that long.

The Clippers looked more motivated on the night as they continue to seek a first NBA Finals appearance in their history.

They lock horns yet again in less than 48 hours with the Suns hoping they can close out the series with a win, to avoid a tension-filled Game 7.