HAVE YOU TRIED THE MEGA JACKPOT PRO YET? IT STANDS AT OVER KSHS 279 MILLION! PREDICTION 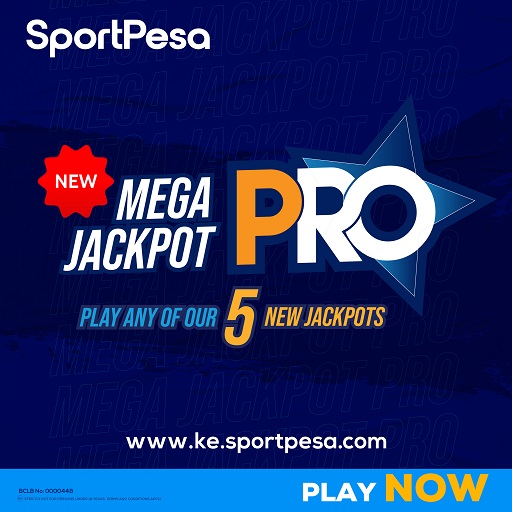 Last week, your entire gaming experience was spiced up with the introduction of an amazing and lucrative twist in the SportPesa Mega Jackpot Pro.

This new feature is an addition to the already existing SportPesa Mega Jackpot, which remains the biggest and progressive football pot in the land.

This weekend brings with it a chance for you to become the biggest football jackpot winner in Kenya with an astounding KSHs 279,719,852.

All this means that with the new Mega Jackpot Pro, which consists of 5 jackpots in 1, the total number of jackpots available on SportPesa adds up to six.

Since there has not been a winner of the current SportPesa Mega Jackpot, the amount for correctly predicting 17 games in the jackpot stands at a whopping KSHs 279,719,852 and is progressive on a weekly basis.

Click this link and have your pick at which jackpot you would like to try out and stand the chance to become the newest millionaire in town!

With the return of European top flight leagues, SportPesa’s Blog has a look at three of the biggest games in this weekend’s Mega Jackpot Pro.

The English Premier League resumes on Boxing Day and a match pitting Everton against bottom club Wolves lights up the Mega Jackpot Pro.

The Toffees come into the game in 17th place with 14 points after 15 games, four more than Wolves who are rooted to the bottom.

Frank Lampard has not had an easy recent weeks in the English top flight and his side remain without a win in their last 3 outings, since a 3-0 victory against Crystal Palace.

Wolves are on a worse trajectory having lost four of their last five games, with a 1-1 draw against Brentford being the only point they have picked up in that run.

Key players such as Dominic Calvert-Lewin, Tom Davies and Andros Townsend remain unavailable for the hosts through injury.

Diego Costa is suspended for the visitors after a straight red card and joins an injured Pedro Neto on the sidelines.

Both teams have a point to prove but Lampard is hanging on by a thread and will need his side to show up at Goodison Park, and they are tipped to win on the day.

West Brom are all set to face Bristol City on Boxing Day and will be full of confidence as they go on the hunt for their sixth straight Championship win.

The visitors have come alive in recent weeks, scoring 9 goals and conceding just once, moving them up to 16th place on the log with 29 points.

Bristol on the other hand have only managed two wins in their last 10 games but are only 2 points behind their opponents.

This game will be a revenge mission for West Brom after they lost 2-0 at home to Bristol in the reverse fixture in October.

The hosts lost 2-1 to Stoke last time out whilst West Brom cruised past Rotherham in an emphatic 3-0 victory.

West Brom have been in good form away from home and are tipped as favorites to win, knowing that a win can shoot them up into the top 10.

Luton also have the chance to move into the top 10 of the Championship table but have a tough test against Norwich first.

The hosts are currently in 15th place with 30 points and despite Norwich being far away in 5th place, only five points separate the teams.

The Canaries are out for blood after they suffered a 1-0 home loss to Luton in the reverse fixture in October and have a fully fit squad to choose from aside from Reece Burke and James Shea.

Norwich are also desperate to return to winning ways after losing 2-0 to Blackburn Rovers in their league game last Saturday.

Luton also lost 2-1 to Middlesbrough, meaning that they are currently on a three-game winless streak and have to change that to avoid sinking further down the table.

This will be a closely-contested affair with both teams expected to score. However, a draw could be the most likely outcome.