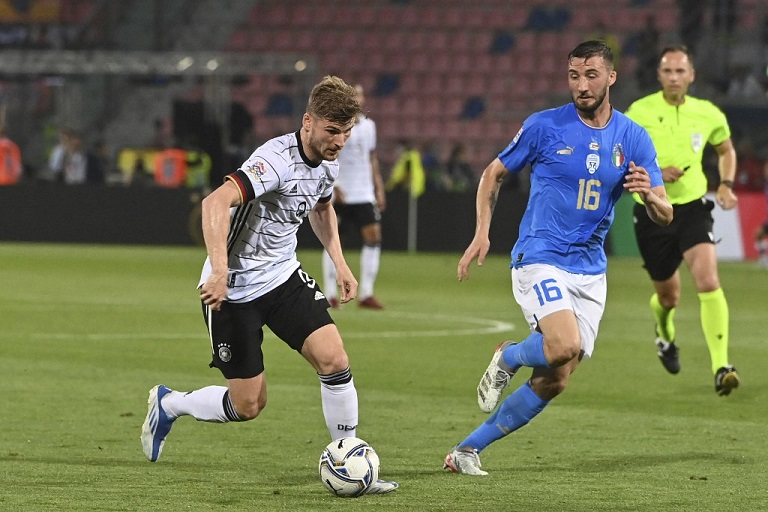 Germany host group leaders Italy in the UEFA Nations League as they seek their first win of the tournament.

Both teams come into the game unbeaten and Italy are atop the group with 5 points, two more than third place Germany.

The Azzurri played out to a barren draw against England last time out as the Germans were held 1-1 by Hungary.

Depending on the England-Hungary game, a win for Germany here could see them shoot to the top of the standings.

Winning just two of their last eight games, Italy are enduring a tricky period following their failure to qualify for the World Cup.

Though, Roberto Mancini’s side are unbeaten in their last 15 away matches and this has the billing to be a mouthwatering clash.

What time does Germany vs Italy start?

The game kicks off at 9:45pm Kenyan time at Borussia Park.

Jonas Hofmann has scored 3 goals in his last 4 international appearances and will retain the right wing-back berth back at his home ground.

Joshua Kimmich and Ilkay Gundogan are also primed to retain their places in the midfield.

With Serge Gnabry and Marco Reus doubtful, Leroy Sane and Timo Werner will start to lead the attacking line.

Lorenzo Pellegrini has been one of Italy’s standout performers in the current international break and is a guaranteed starter as well as Matteo Politano.

Germany vs Italy head to head

From the 10 games played between these two, the hosts have only won once, compared to Italy’s 4 wins.

The remaining 5 have resulted in a draw.

The Germans have drawn their last 4 games but are unbeaten in their last 5 outings. Italy on the other hand have lost just once in that run and won twice.

This will be a closely contested affair but the home side are tipped to record a narrow win.

WILL IT BE PORTUGAL OR CZECH REPUBLIC TO REMAIN UNBEATEN? PREDICTION