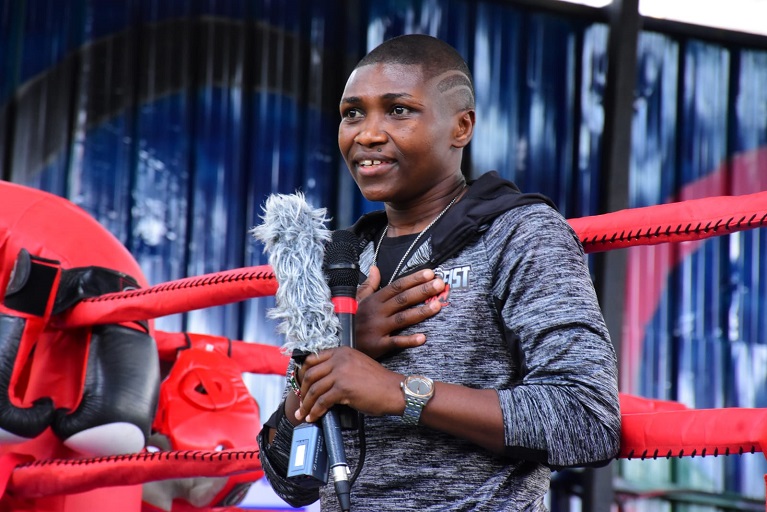 Former WBC Super Bantamweight champion Fatuma Zarika called on girls to pursue boxing as she graced the unveiling of the newly-upgraded Umoja Boxing Gym on Wednesday.

Zarika, who is a SportPesa brand ambassador, is one of the female pioneers in the Kenyan boxing fraternity and is an inspiration to many daring to dream in the sport.

Zarika became the first Kenyan to win the WBC title in 2016 when she defeated Alicia Ashley in Michigan and held the title for three years.

“I’m very grateful to be here and this is also my home area, so it fills my heart to see such things happening

“I want to say thank you to SportPesa and everyone for choosing to help boxers like myself have a chance to realise their dreams,” an emotional Zarika stated.

She resides in Fedha Estate, not too far from the Boxing Gym and she went ahead to pledge that she will as well visit the gym and train there as often as she can.

After having a tough rise to the top, Zarika and SportPesa formed a partnership that saw her train with the best coaches in England and return home to make Kenya proud by defending the world title twice.

Zarika beat Catherine Phiri of Zambia via unanimous decision before defending the title by thrashing Mexican Yamileth Mercado at the second edition of the Nairobi Fight Night.

“Boxing is not easy but because of people like this and such opportunities, there’s a real chance.

“I have been boxing for 21 years but i reached my prime because of SportPesa and I will forever be grateful because of how far they have brought me,” the mother of two added.

She has not been in the ring for a year, since beating Tanzania’s Patience Mastara in Dar es Saalam last year in the vacant World Boxing Federation Super Feather title.

As she signed off, she urged all women like herself who have even a simple adoration for the sport to pursue it because nobody knows the heights it can take one to.

“I urge girls to come out and also enter the sport. It’s not only for men. We can all do it if we want to.

“Anyone with a passion for boxing, I urge you to make use of this gym. Be disciplined and work hard, then everything will fall into place,” Zarika concluded.