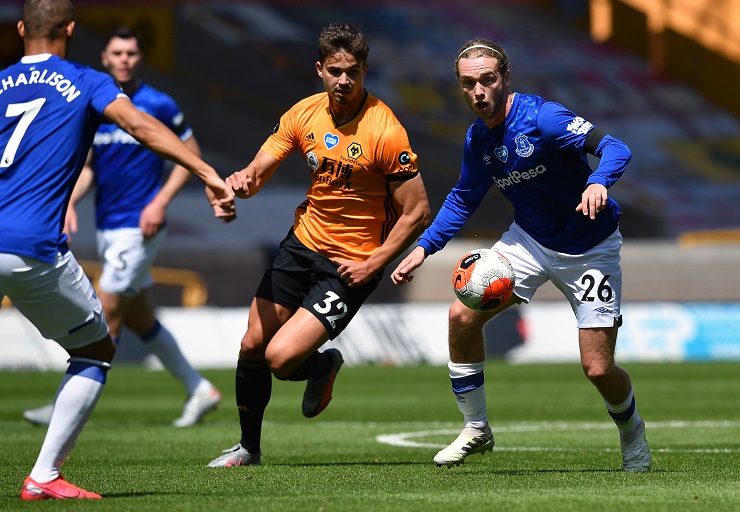 Carlo Ancelotti’s Everton take on Wolves knowing that nothing less than a victory is acceptable if they are to qualify for the Europa League next season.

The Toffees are currently in ninth place with 56 points, level with Leeds who have played a game more, a 2-0 victory against Southampton on Tuesday night.

Wolves come into the game in 12th place with 45 points, hoping to bounce back from a 2-0 loss to Tottenham last time out.

That defeat meant Wolves can no longer secure a third successive top-half finish since their promotion to the Premier League in 2018.

Everton have now won only one of their last 11 league games at Goodison Park, with their home record only the 15th best in the division so far this season.

Before you pick your winner, SportPesa Kenya’s blog has a look at all you need to know ahead of the midweek clash.

What time does Everton vs Wolves start?

The game kicks off at 8pm Kenyan time at Goodison Park.

The hosts are happy to have Yerry Mina and Josh King back available for Wednesday’s game, after they both recovered from minor injuries.

Gylfi Sigurdsson will start against Wolves in place of Mason Holgate.

Up front, Dominic Calvert-Lewin is tasked with the job of finding the goals for the home side who have to bag all three points.

For the visitors, defenders Willy Boly and Marcal could get some playing time after being unused substitutes at Tottenham at the weekend.

The likes of Daniel Podence, Pedro Neto and Jonny still remain on the sidelines through injury.

Everton vs Wolves head to head

After facing off against each other 13 times, Everton have the advantage, winning 5 times compared to Wolves’ three victories.

The remaining five matches have resulted in a draw.

There is nothing separating these two sides in terms of recent performances.

Either side has won twice, lost twice and drawn another in their most recent run of five matches.

The hosts have a lot more on the line and this factor alone should be enough to push them to get all three points on the night.

Though Wolves are no push over so it could be a low-scoring affair.