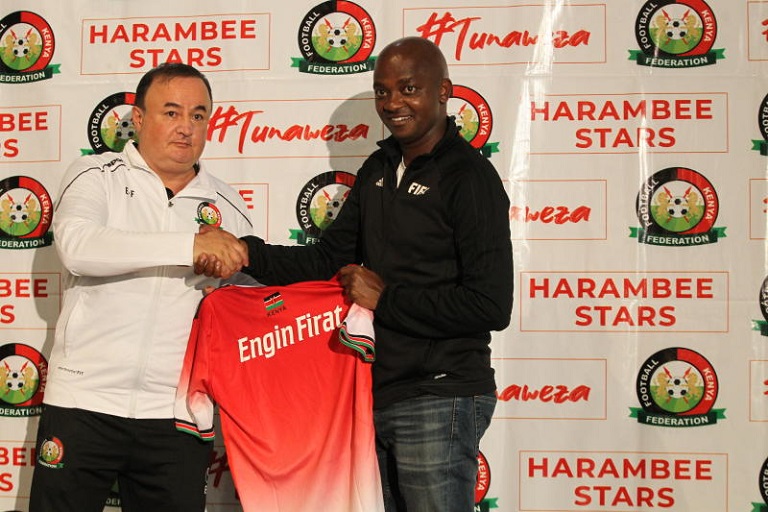 The Football Kenya Federation announced that they have appointed German-Turkish tactician Engin Firat as the new head coach of the Harambee Stars.

Firat has been appointed the Kenyan national team coach on a two-month contract, taking over from Jacob ‘Ghost’ Mulee who resigned from the post a few days ago.

The 51-year-old tactician will be assisted by Kennedy Odhiambo and William Muluya, while Jerim Onyango will be the new Goalkeeping Coach.

Firat’s assignment will be the upcoming 2022 FIFA World Cup Qualifiers against Mali, away and home, on October 8, and October 12, 2021, respectively.

“FKF is bringing Firat at a time when Harambee Stars are competing for a FIFA World Cup ticket, and Kenya stand second in the group E and we have a clear chance to compete well in this group,” FKF President Nick Mwendwa said.

According to Firat, he wants to be in the Qatar World Cup and fulfilment of the desire, or not, will determine if his next step after the two months.

He defended his poor record with Moldova where he won no match in 11 outings, saying he is proud of the results he registered against some strong oppositions in Europe.

“This is an interesting project and I am glad to be here, hopefully, we succeed. Kenya is a good football nation and I am looking forward to work here.

“Moldova is not a footballing nation. Playing high-level teams in Europe and drawing some of them does not necessarily reflect the capability of a coach,” he noted.

The coach also hinted at bringing in some foreign-based players who have been out of the squad in Mulee’s tenure, saying he has talked with Mwendwa about it.

Kenya will play Mali away in Agadir, Morocco on October 6 before the return leg in Nairobi four days later, in Firat’s first two duties.