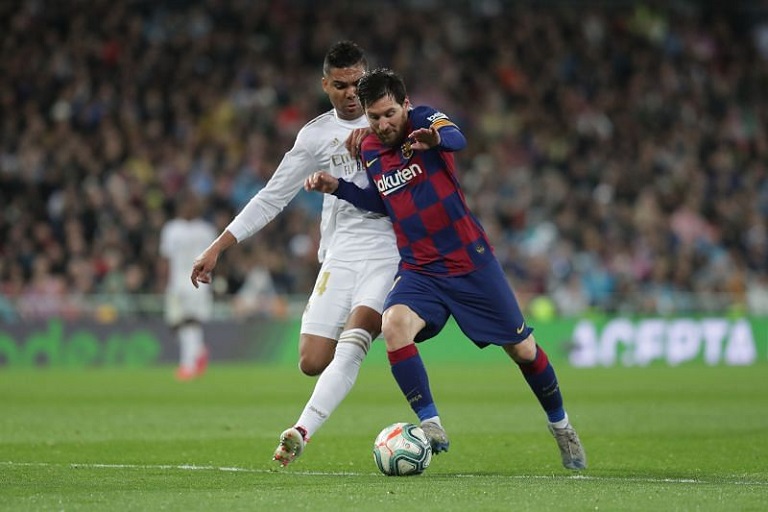 Both teams are in desperate search of a win if they are to keep alive their hopes of winning the Spanish league title this season.

Barcelona are currently in second place on the table with 65 points, one behind leaders Atletico Madrid whilst the hosts Real are in third place with 63 points.

Unbeaten in La Liga since the end of January, Los Blancos have won seven and drawn three of their last 10 league matches to leave themselves very much in the title picture.

A defeat for Madrid on Saturday would see them lose precious ground, but a victory would leave them in a strong position leading into fixtures against Getafe, Cadiz and Real Betis before the end of April.

Neither side have been keeping clean sheets with any real regularity, with the Catalans conceding in 11 of their last 16 competitive fixtures and Los Blancos managing just one in their last seven games.

Ahead of the mouthwatering encounter, SportPesa Kenya’s blog has a look at all the information you need before picking a winner.

What time does Real Madrid vs Barcelona start?

The match is scheduled to kick off at 10pm Kenyan time at the Alfredo Di Stefano Stadium.

There is every chance that Zinedine Zidane could decide to select the same XI that took to the field against Liverpool. with captain Sergio Ramos and Dani Carvajal still absent for the home side.

Eden Hazard has made progress in recent weeks but the game has come too soon for him as he has been left out of the squad.

Club top scorer this season Karim Benzema will lead the attack and after scintillating performances in midweek, he will be joined by Carlos Vinicius and Marco Asensio.

Barca remain without Gerard Pique, Ansu Fati, Sergio Roberto and Philippe Coutinho, meaning that Sergino Dest is likely to maintain his spot in the starting XI.

There are not expected to be any changes further forward as the trio of Lionel Messi, Antoine Griezmann and Ousmane Dembele are all in line to lead the visitors attack.

Out of the 62 matches played between these rivals, Barcelona have a slight advantage – winning 24 times.

Real Madid have won 20 times and the remaining 18 have resulted in a draw. Madrid are successful in their last two attempts, winning both fixtures in 2020.

Both sides come into the encounter on impressive runs of form, with Barcelona winning their last six La Liga matches and Real Madrid unbeaten in the league since the end of January.

This game will undoubtedly provide goals for either side. Though, despite the run of form that Barcelona are enjoying – I think Real Madrid have what it takes to win on the day.