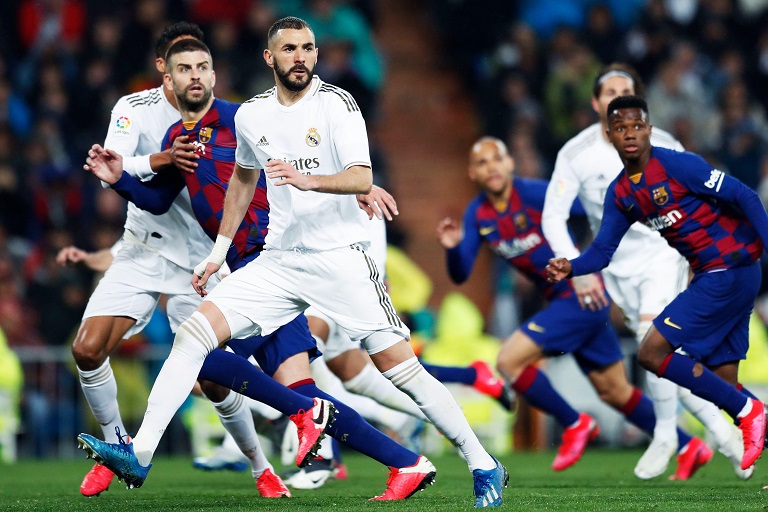 The biggest match in the Spanish football calendar is here as Barcelona look to turn their fortunes around when they host eternal rivals Real Madrid.

The hosts have had an unfamiliar start to the La Liga season and are currently in 8th place with 15 points, two behind Madrid who are in third place.

Barcelona have taken 13 points from a possible 15 at home in the league this term, making this post-Messi clasico one to look forward to.

The corresponding fixture last season ended in a 3-1 win for Madrid, with Federico Valverde, Sergio Ramos and Luka Modric on target while Ansu Fati scored an early goal for Barca.

Prior to defeat at Espanyol, Real Madrid had posted an 18-game unbeaten run away from home in La Liga and have also strung together a three-game winning run in El Clasico.

SportPesa’s blog has a look at both teams ahead of the mouthwatering tie, play here to make your predictions.

What time does Barcelona vs Real Madrid start?

The game kicks off at 5:15pm Kenyan time at the Camp Nou.

Jordi Alba picked up a foot injury in the Champions League in midweek and could potentially be sidelined for the game.

He could join a list of injuries that include Martin Braithwaite, Ousmane Dembele, Pedri and Ronald Araujo.

Ansu Fati – fresh from signing a new six-year deal – is likely to start as well as Sergi Roberto for Oscar Mingueza.

For the visitors, Dani Ceballos and Gareth Bale are the certain absentees.

Eden Hazard is recovering and may have to settle for a place on the bench, as well as Dani Carvajal.

Vinicius Junior has scored seven goals in 11 matches and will partner with Karim Benzema up front to provide the goals for Carlo Ancelotti’s side.

These two sides have gone up against each other 63 times and Barcelona have come out on top 24 times. Though they have not won since March 2019.

Real have won 21 times and 18 have resulted in a stalemate.

Both sides have lost twice in their most recent run of five matches and have a lot to improve on if they are to get all three points from this encounter.

Madrid have the better record in their last five meetings, winning three times and they have already scored 22 times this season. They could just come out on top.