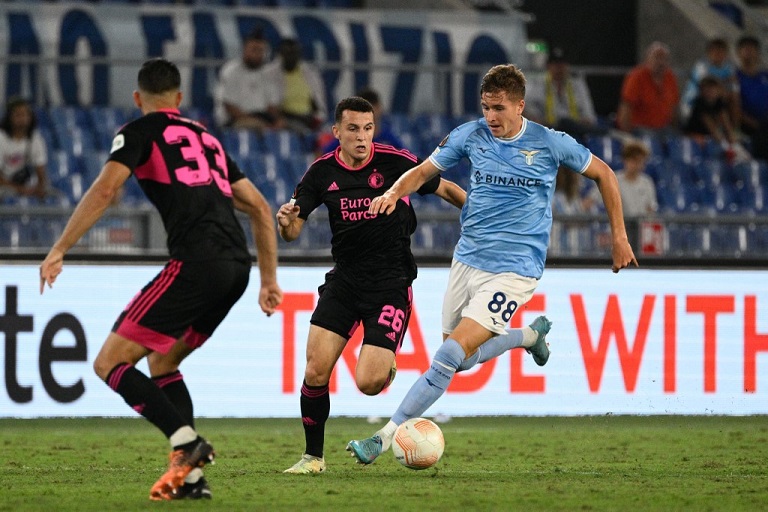 Feyenoord are all set to host Lazio in their final Group F game with a win for either side confirming their qualification for the Europa League knockout stages.

The Dutch side can only confirm their place in the top two if they win by two goals or more – or if they win and Sturm Graz lose.

The Italian outfit were victorious in the first leg as they romped to a 4-2 victory and sit at the top of the table with 8 points, level with Sturm Graz.

Feyenoord follow in 3rd place with 5 points, level with Midtjylland who are at the bottom of the log.

Last week, goals from Pedro and Sergej Milinkovic-Savic earned a 2-1 win over Midtjylland – and with it, a slice of revenge for their thumping in Denmark.

There is still all to play for in this group for all the teams and it will be interesting to see who makes it into the next stage.

What time does Feyenoord vs Lazio start?

The game kicks off at 8:45pm Kenyan time at de Kuip stadium.

Patrik Walemark and Santiago Gimenez are both expected to return to the starting line-up for the hosts.

Igor Paixao is also set to start on the day to offer more attacking options alongside Javairo Dilrosun.

For the visitors, they continue to do without the services of striker Ciro Immobile who is out with a hamstring injury.

Mattia Zaccagni, Felipe Anderson and Pedro are all expected to start.

Feyenoord vs Lazio head to head

From 3 matches played between these sides, each have won once with another resulting in a stalemate.

Both teams have an identical run of form coming into this clash – two wins, two draws and one defeat in their recent run of 5 matches.

With all that’s at stake, both teams are expected to put their best foot forward and Feyenoord may upset Lazio and come out winners on the day.