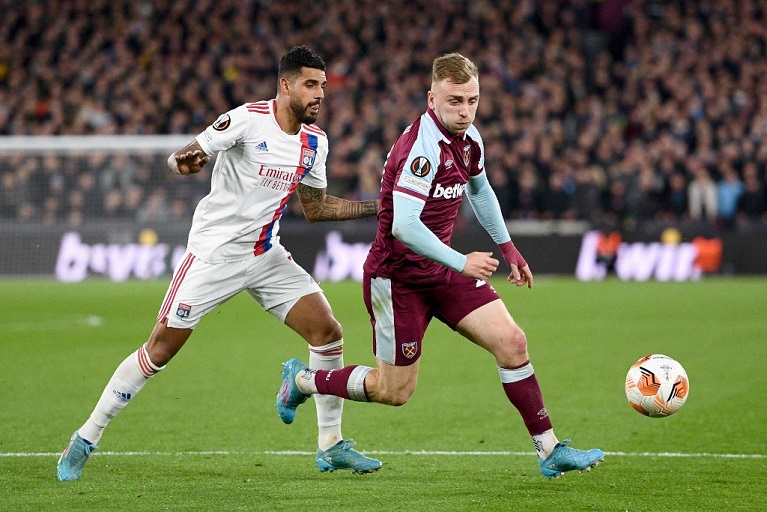 West Ham travel to Lyon to battle it out in their Europa League quarterfinal second leg after a 1-1 draw in London last week.

Jarrod Bowen and Tanguy Ndombele were both on target in the first leg, leaving this tie perfectly poised ahead of Thursday’s game.

The away-goal rule does not count in this year’s edition and the winner will book a spot in the semis.

The hosts were held to a 1-1 draw by Strasbourg at the weekend while the Hammers suffered a 2-0 shock defeat to Brentford.

David Moyes’ side played the entire second half with 10 men and will be confident they can bag all three points away from home.

The ‘Hammers’ now need to overcome a three-game losing run in European knockout away matches, which saw them fail to find the net on each occasion.

Who will book a place in the semis? Play here to make your predictions for the clash.

What time does Lyon vs West Ham start?

The game kicks off at 10pm Kenyan time at the Groupama Stadium.

Tanguy Ndombele, Houssem Aouar and goalkeeper Antony Lopes are all major doubts for the hosts after picking up injuries over the weekend.

Karl Toko-Ekambi is fit and raring to go and Tete may finally get the nod to feature from the start.

West Ham will be without Aaron Creswell who was sent off in the first leg, joining Angelo Ogbonna and Kurt Zouma.

Bowen is set to start to continue his goal-scoring form and Michail Antonio is hoping to break his drought.

The only match ever played between these two sides ended in a 1-1 stalemate at the London Stadium.

The hosts are unbeaten in their last five games but have only managed one win in that run.

The Hammers have won twice, lost twice and drawn another in their recent run of five games.

There is a lot on the line for either side as they seek to take a step toward European glory, though another draw could potentially be on the cards.