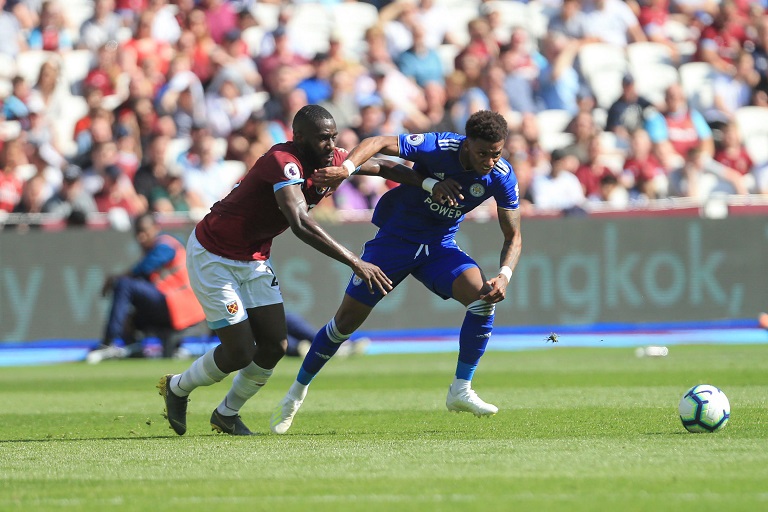 The last game of matchday 2 in the English Premier League sees West Ham host Leicester City on Monday night at the London Stadium.

Both teams are looking to maintain a perfect start to the 2021/22 season, after they registered wins on the opening day of the campaign.

The Hammers came from behind twice to beat Newcastle United 4-2 at St. James’ Park whilst a Jamie Vardy goal was enough for the Foxes to beat Wolves.

Leicester’s victory in front of the King Power faithful came one week after they lifted the Community Shield by sinking Manchester City.

West Ham have entered the season with a lot of optimism and frustration surrounding them – the former because they are set to play in Europe this season.

Who will come out on top on the night? Play here and make your predictions

What time does West Ham vs Leicester start?

Arthur Masuaku, who is recovering from a knee injury, is the only first team player who is sidelined – meaning David Moyes has a full squad to choose from.

Lukasz Fabianski remains in goal despite the arrival of Alphonse Areola and a familiar back line of Aaron Cresswell, Vladimir Coufal, Angelo Ogbonna and Craig Dawson ahead of him.

Michail Antonio is set to lead the attacking line flanked by Jarrod Bowen and Said Benrahma.

For the visitors, James Justin (knee) and Wesley Fofana (calf) remain long-term absentees for Leicester while the likes of Jonny Evans (ankle), Nampalys Mendy (groin) and Ryan Bertrand (coronavirus) all on the sidelines as well.

James Maddison will take up advanced positions alongside Ayoze Perez and Harvey Barnes.

Jamie Vardy should get the nod despite Kelechi Iheanacho scoring three goals in four matches against the London side.

There is nothing separating these sides, with both of them winning 9 games against each other.

Another seven matches have resulted in a draw. Though, West Ham have been victorious the past two times they have met.

The hosts come into the game on a better run of form, having won all of their last five games, scoring 16 times in the process.

Meanwhile, Leicester are on a three-match winning streak but lost and drew another game prior.

This game has the potential to be a cracker of an encounter full of goals but West Ham might just have enough gas to win on the night.