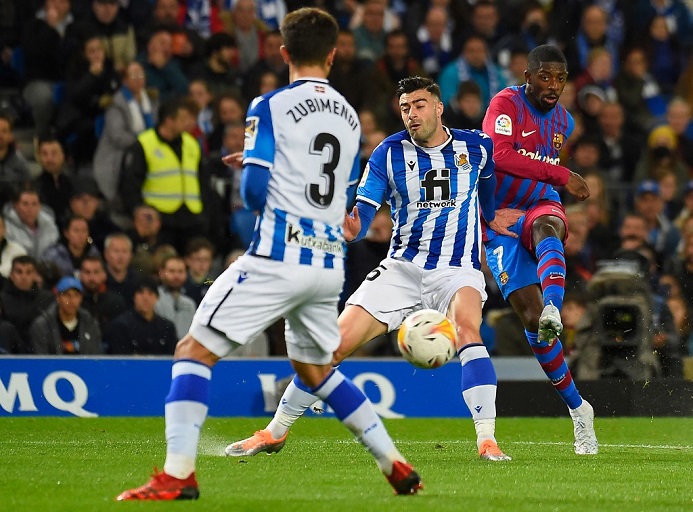 Real Sociedad have not beaten Barcelona in the league in nearly 5 years and will be hoping to change that this Sunday.

Sociedad beat Cadiz 1-0 in their opening match of the 2022/23 campaign while Barcelona played out to a a barren draw against Rayo Vallecano.

After finishing 6th in La Liga, there is plenty of optimism surrounding Sociedad’s chances of pushing for a Champions League qualification this season.

Sociedad have improved since the appointment of Imanol Alguacil as head coach in 2018, guiding them to a top-half finish in each of his four full seasons in charge.

Barca spent close to £150m bringing in new players despite their debt situation and it is evident that there is still a lot to be done.

Place your bets for this game and more here.

What time does Sociedad vs Barcelona start?

The game kicks off at 11pm Kenyan time at the Reale Arena.

Talisman Mikel Oyarzabal is sidelined until mid October after rupturing his cruciate ligament.

Alex Sola and Carlos Hernandez are also sidelined but will be replaced by Brais Mendez and Mikel Morino.

David Silva will be the main point of creativity for the home team.

The visitors will hope the inclusion of new signings Franck Kessie and Robert Lewandowski will inspire their form.

Sergio Busquets is suspended and will sit this one out, meaning Frenkie De Jong will also be included in the starting XI.

Sociedad vs Barcelona head to head

Barca are miles ahead when it comes to head to head after winning 31 times from the 45 games played. Sociedad have won 6 games.

The hosts have won three and lost two games in their recent run of five whilst Barcelona come into the encounter unbeaten in a similar run.

There is pressure on Barca getting their first win of the season and this may fuel them enough to register a narrow away win on the day.