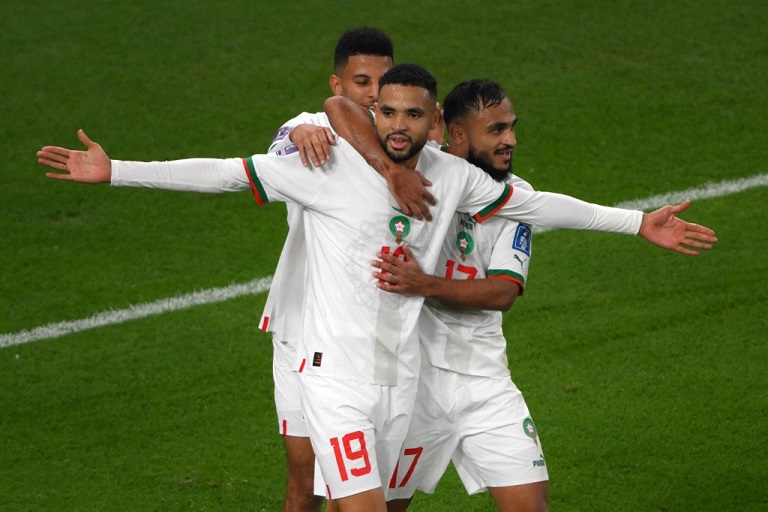 Morocco already stunned the world by finishing top of Group F unbeaten with 7 points, now they face Spain for a place in the quarters.

The North Africans are the only team from the continent left in the tournament and have already beaten Belgium and Canada on their way here.

Spain on the other hand finished in second place in Group E behind leaders Japan, who beat them 2-1 in their final group game.

This marks only the second time that Morocco have got this far, having been eliminated in the last 16 in 1986.

La Roja on the other hand were eliminated in the round of 16 by hosts Russia four years ago and have only ever the World Cup once in 2010.

Spain are set to face an African side in the knock-out stages of the FIFA World Cup for the first time – they are unbeaten in their five group games against teams from the continent.

Morocco’s four-game unbeaten run at the World Cup can only be beaten by Cameroon’s five between 1982 and 1990 out of all the African nations.

The previous meeting between the two teams took place in the group stages of the 2018 FIFA World Cup and ended in a 2-2 draw.

Can Morocco muster a surprise win here to qualify for the quarterfinals for the first time in their history?

Click here to place your bet for the enticing encounter.

What time does Morocco vs Spain start?

Yassine Bounou, who felt unwell just before the win over Belgium, was able to complete the full 90 minutes against Canada and will start here.

Achraf Hakimi is expected to be passed fit despite nursing some ankle problems, but the PSG right-back was one of several starters not risked in full training on Saturday.

Hakim Ziyech, Sofyan Amrabat and Sofiane Boufal were also rested but will return to the starting XI.

David Raya and Cesar Azpilicueta are both expected to return to Spain’s starting line-up here.

Ferran Torres is also expected to return to the XI, as Alvaro Morata may be handed another start here to add to his goal tally.

Morocco vs Spain head to head

The only competitive match played against these two sides was the 2-2 stalemate in the group stage of the 2018 FIFA World Cup.

The Moroccans are on a much better run of form than their opponents, winning three and sharing the spoils in the remaining two from their last five matches.

Spain’s loss to Japan was their only one in their last five games – sharing the spoils in another and winning the remaining three.

There has been no lack of goals from either side – with an average of 1.5 goals being scored in their last few games.

Both teams are tipped to score but Spain are favorites to win and end Morocco’s dream.