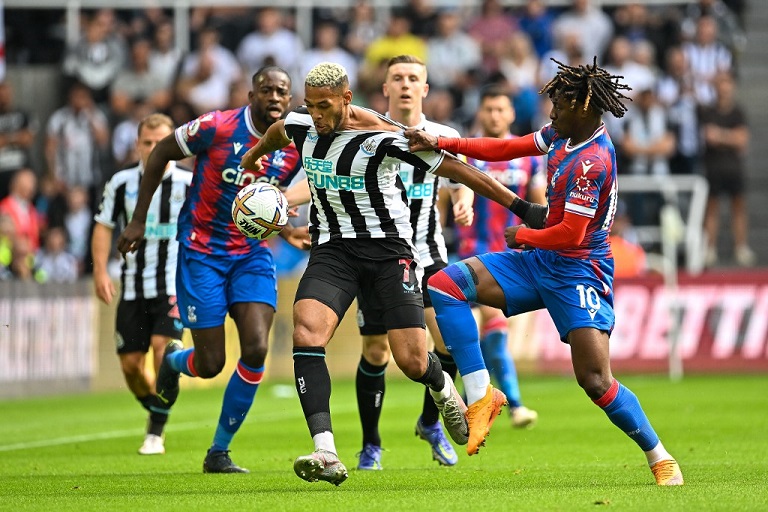 Crystal Palace have a huge task on their hands if they are to get something from their English Premier League clash against Newcastle United.

Palace left it late to draw 1-1 against Manchester United in midweek, leaving them in 12th place with 23 points.

Newcastle on the other hand battled to a 1-0 victory against Fulham last time out to extend their unbeaten run to 14 games.

Eddie Howe’s side are in 4th place with 38 points and a win here could see them temporarily leapfrog United to reclaim their top three position.

Newcastle have kept clean sheets in their last 5 league games and have the best defensive record in the top flight after conceding just 11 goals thus far.

The visitors are unbeaten in their last four meetings against Palace, winning 3-2 on penalties when they last met in the League Cup in November.

They are also unbeaten in their last six away league games, keeping three clean sheets, giving them plenty confidence ahead of this clash.

Interestingly, Palace have suffered eight consecutive defeats in Premier League games at Selhurst Park kicking off at 5.30pm on a Saturday.

Will this curse be broken and can Patrick Vieira’s side get a shock league win here on the day? Click this link to place your bet on SportPesa.

What time does Palace vs Newcastle start?

The game kicks off at 8:30pm Kenyan time at Selhurst Park.

Jordan Ayew and Eberechi Eze are desperate to be recalled into the starting XI but Will Hughes is set to retain his spot in the midfield.

Michael Olise scored a stunning free-kick in midweek and will start alongside Wilfried Zaha in the final third.

Chris Richards, who made his first EPL start against United will retain his spot in the back line.

Emil Krafth, Paul Dummett, Matt Targett and Jonjo Shelvey are all unavailable for the visitors due to injury.

Aleksandr Isak is set to start again as well as Allan Saint Maximin up front.

The rest of the visiting side is set to remain unchanged.

Palace vs Newcastle head to head

The two teams have gone up against each other 53 times across competitions since their first meeting in the FA Cup in 1907. Newcastle have been the better side in these meetings, leading 30-12.

The hosts just have win to their name in their last 5 games, losing three times and sharing the spoils in the 1-1 draw against United.

Meanwhile, the Magpies have won twice, drawn twice and lost just once in that run.

The visitors defense has proved almost impenetrable and it is unlikely that Palace will score more than one goal, if at all they do.

Newcastle are tipped as favorites to bag yet another away win.