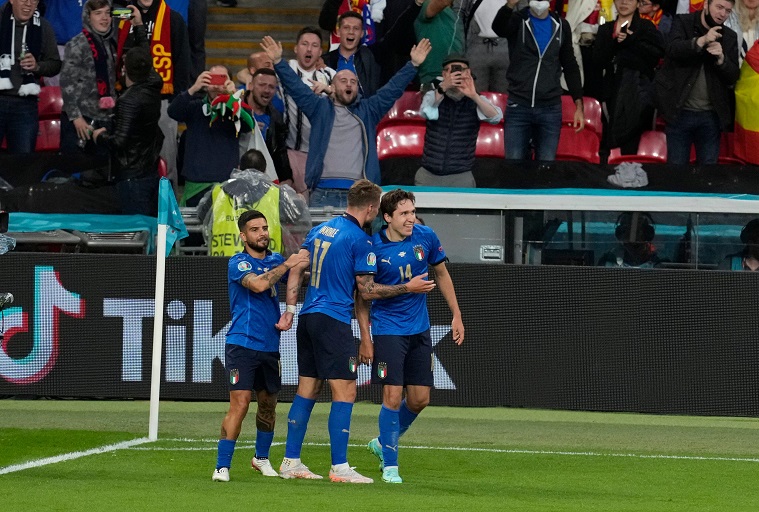 Italy are top of Group C with 9 points after three games, where they have scored six times and have not conceded a single goal.

Bulgaria on the other hand are in fourth place with 1 point, still in search of a first win in the qualifiers.

Their remarkable run without defeat now covers a period of nearly three years, and Mancini will certainly not expect standards to drop soon after reaching such a pinnacle.

Bulgaria have come out on top in just two of their last 28 matches – the most recent of which was a friendly success versus Gibraltar in November.

Ahead of the clash, you can play here to make your predictions.

What time does Italy vs Bulgaria start?

The game kicks off at 9:45pm Kenyan time at the Stadio Artemio Franchi.

Leonardo Spinazzola and Andrea Belotti are the notable absentees from the Italian line-up but there are more than capable replacements.

Ciro Immobile, Moise Kean and Giacomo Raspadori are all available options for Roberto Mancini up front.

Giovanni Di Lorenzo ought to get the nod over Davide Calabria in the right-back slot while on the opposite end, Emerson Palmieri is the automatic pick in the absence of Spinazzola.

For the visitors, coach Yasen Petrov included 10 uncapped players in his first squad as national coach during the spring.

Petko Hristov, Valentin Antov and Vasil Bozhikov will be installed as the three central defenders for Bulgaria with Todor Nedelev and Birsent Karagaren are likely to be deployed as the two wing-backs.

Kiril Despodov will be the lone striker up front.

Italy vs Bulgaria head to head

Bulgaria have never recorded a win against Italy in all the 8 matches they have played against each other.

The Italians have won 5 times, whilst the remaining three have resulted in draws.

The home side are unbeaten in their last 34 matches, meanwhile the opponents have not recorded a single win in their last 8 outings prior to this encounter.

The hosts are favorites to come out on top in this game and most probably will do so without conceding a goal.