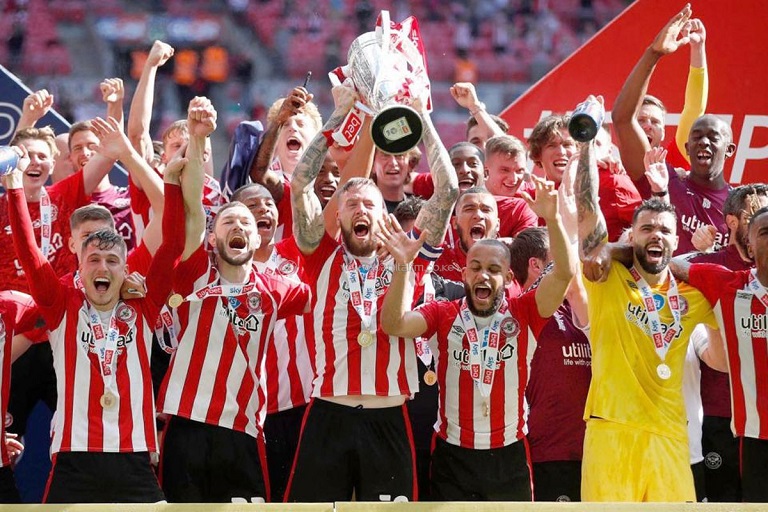 The Bees secured their first season in the top-flight of English football since 1946-47, with a 2-0 win over Swansea City in the Championship Playoff final.

In what is regarded as the richest game in world football, there is a minimum prize of £170million for being promoted to the English Premier League.

The match was played in front of 12,000 fans at Wembley as sport continued its slow progress back to normality after the COVID pandemic closed stadium doors.

Goals from Ivan Toney and Emiliano Marcondes were enough to ensure the West London side are among the top 20 elite clubs in English football next season.

“We are an example to follow for so many clubs around the world. I’m so pleased and proud to be part of this journey. There should be a lot of clubs out there dreaming.

“It is up to us to continue the journey next year,” said Frank, who was appointed boss in 2018.

Brentford made up for their 2-1 loss to Fulham in last year’s Championship playoff final and ended their 74-year exile from top flight football.

It was 10th time lucky for the Bees who previously appeared in nine Championship playoff finals since 1991, with all of them ending in defeat.

“It’s crazy. I’ve got no words, my voice is going.

“It’s the best dressing room I’ve been in, I’ve loved every minute of it. I’m in the Premier League with the best bunch of boys I could ever dream of.

“I’m a Premier League striker now and I can’t wait to score goals there,” goal scorer on the day Toney stated.

The 25-year-old signed from Peterborough for what was Posh’s club record fee received, bagged 33 goals this term and looks keen to make his mark in the English Premier League.

The Brentford side of 2019-20 was a fluid, attack-minded machine that won plaudits for an adventurous style of football which brought 80 goals in 46 games.