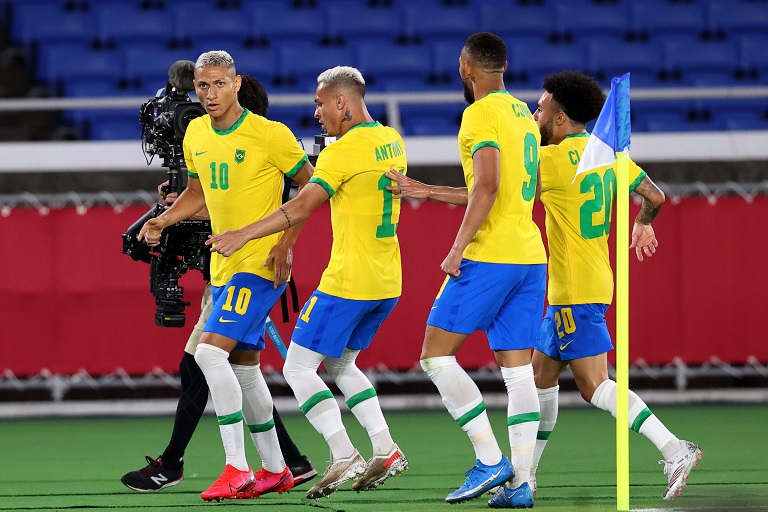 After the men’s football at the Tokyo Olympics got underway last Thursday, Brazil and Ivory Coast lock horns at the International Stadium in Yokohama.

The defending champions Brazil kicked off their title defense with a 4-2 victory against Germany in a six-goal thriller.

The match was a repeat of the 2016 Rio Olympics final, where Brazil won Gold after a 5-4 win in a post-match penalty shootout.

Everton forward Richarlison scored a first half hat-trick to guarantee all three points for Brazil as they top Group D.

Ivory Coast are level on points with Brazil, after they battled to a 2-1 victory against Saudi Arabia in their opening match.

An own goal from Al Nassr centre-back Abdulelah Al-Amri and a second-half goal from AC Milan midfielder Franck Kessie sealed the deal for Ivory Coast.

Which of these two teams will make it two wins in a row? Test your prediction skills here

What time does Brazil vs Ivory Coast start?

The game kicks off at 11:30am Kenyan time at the International Stadium of Yokohama.

Captain Dani Alves had an outstanding game for Brazil and together with Richarlison, they are both expected to retain their starting berths.

It will be interesting to see whether Arsenal youngster Gabriel Martinelli will be included in the starting line-up after he missed the first game.

For Ivory Coast, the experience of Manchester United defender Eric Bailly proved key in their opening victory and they will count on him this Sunday as well.

AC Milan forward Franck Kessie was lethal in the game against Saudi Arabia and his threat will lead the attacking line.

These two sides have only played against each other once before, at the 2010 FIFA World Cup.

Brazil won the game 3-1 courtesy of a brace from Luis Fabiano and Elano added the third goal. Ivory Coast’s top goal-scorer of all time Didier Drogba scored their lone goal.

The Ivorians come into the game with a better record, unbeaten in their last five- winning three times.

Brazil’s 1-0 loss to Argentina in the Copa America a fortnight ago is their only loss in their recent run of five matches.

The defending champions showed their intent to retain Gold and it is very unlikely that Ivory Coast can get a win on the day.