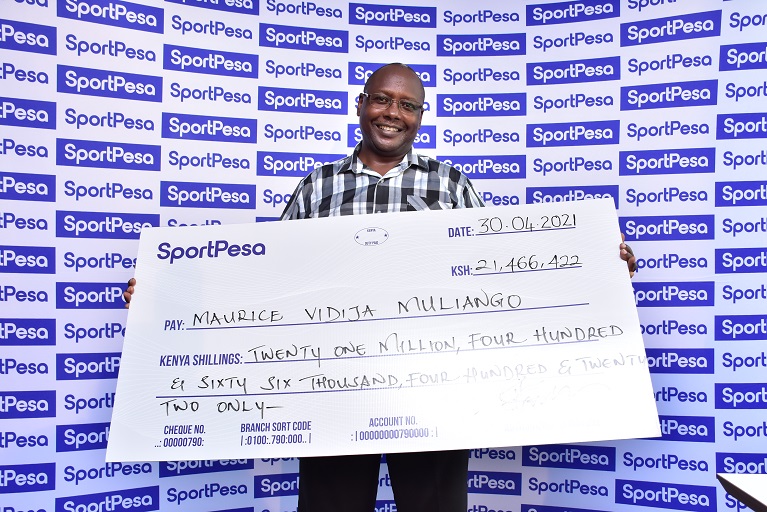 Maurice Vidija Muliango became the second winner of the SportPesa Mid-Week Jackpot this year after correctly predicting the outcome of 13 select football matches in last week’s jackpot that ended on Friday April 30.

As fate would have it for Muliango, it was the second time he got millions by winning the Ksh21,466,422 SportPesa Mid-Week Jackpot, a befitting pay day as April ended.

Having previously won Ksh1.8 million in a multibet and a bonus of Ksh26,000 through gaming with SportPesa was delighted for bagging his biggest win yet on the platform, claiming he is now unstoppable.

“First, I would like to thank SportPesa for the transparency in the gaming process. While we do this as a hobby, the winnings help us build ourselves, provide better for our families and transform lives,” said an elated Muliango.

Muliango, a die-hard Arsenal fan, revealed the satisfaction one derives from predicting the outcome of a game correctly, which becomes even sweeter when one is rewarded.

“I am now setting my sights on the SportPesa Mega Jackpot which currently stands at Ksh122,722,511.

“My passion for the beautiful game of football helps me make my predictions and I have been gaming for around five years and this is the biggest amount I have ever received,” Muliango stated.

“Despite being an Arsenal supporter, I knew that the chances of them winning the first leg against their former manager Unai Emery was hard and I had to go against them,” he added.

Muliango says that he has been gaming on matches as a way of further supporting his passion – football. With his winnings, he plans to inject more capital in his investment projects that will ensure his future is secure when he retires from the civil service.

SportPesa has been involved in supporting community projects across the country in the areas of maternal health, menstrual health and sports. Most recently, the company equipped a maternity wing at Ndarawetta Dispensary in Bomet County in addition to sponsoring Heels4Pads, an organisation that champions menstrual hygiene amoung girls.

SportPesa also gave a shot in the arm to the Wazee Pamoja League with a Ksh800,000 sponsorship, a league that involves former professional footballers and players passionate about the sport.