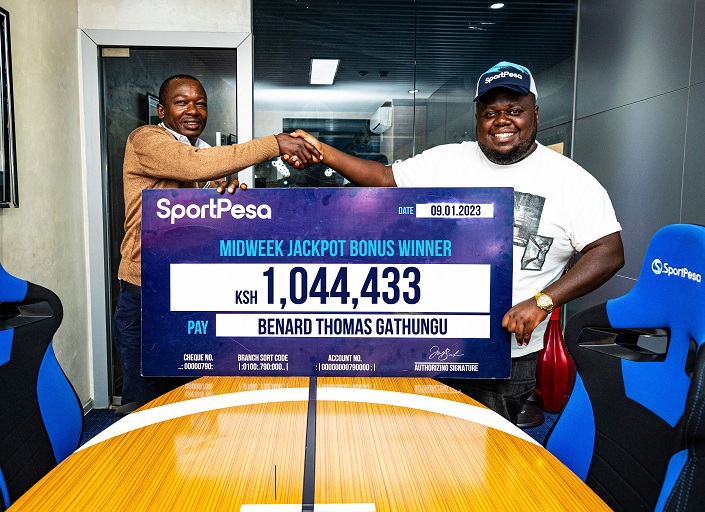 Bernard Thomas Gathuku is the latest millionaire in the country, after he came agonizingly close to winning the entire SportPesa Midweek Jackpot.

His stellar efforts saw him correctly predict 12/13 games in the jackpot, granting him a handsome bonus payout of KSH 1,044,433.

Goa FC from the Indian Super League is the only team that cost him a whopping KSHs 11,627,709 as they lost to Hyderabad FC.

“I had 10 correct games and there three left to be played on the final day. Goa’s game was first in the afternoon.

“Unfortunately I had tipped them to win but after the loss, my chances of winning the entire jackpot went away with it,” Gathuku recalls.

A Kamiti-based mason, Kelvin Makokha, was the last winner of the progressive SportPesa Midweek Jackpot on December 11.

Makokha correctly predicted the outcome of all 13 games in the pot to win a handsome KSHs 15,003,352 to usher in the festive season in style.

“The two games left however went in my favor and I was still more than happy to win such a big amount of money. I even had to forward my wife the message for her to confirm.

“I know I can even win the Mega Jackpot Pro which is at over 280 million shillings now and I will keep trying my luck,” he added.

Gathuku, a hawker from Kayole, plans to expand his business in a bid to better his family’s life and expressed extreme gratitude to SportPesa after the win.

He admitted to mostly playing the Midweek Jackpot but on occasion he also attempts the improved Mega Jackpot Pro.

“Everyone should believe that SportPesa is real and that you can win all the money in their jackpots, you just have to keep trying.

“I have gotten my money without any issues and it’s more money than I have ever won in my lifetime. My wife and I are extremely happy,” he concluded.

The Jackpot now stands at a life changing KSHs 12,259,074 and it only costs 99 shillings to place your bet and you could be the next millionaire.

It kicks off on Wednesday, January 11 with a Cyprus Cup match pitting AEL Limassol and Apollon Limassol, click here to place your jackpot bet slip.